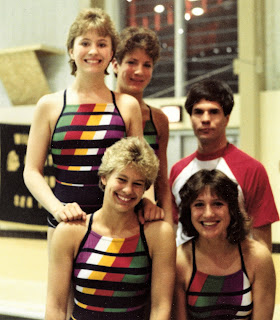 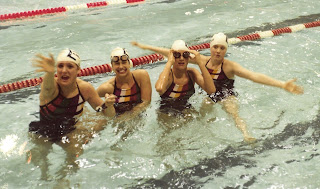 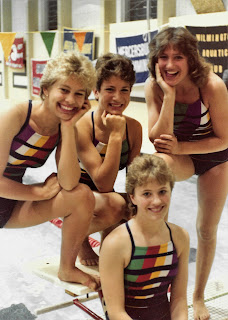 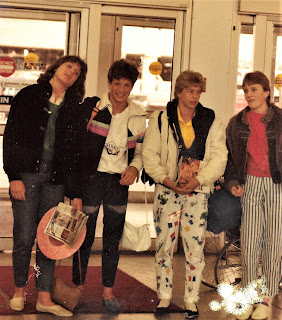 Young Wizards ahead of time

By DAVE REYNOLDS of the Journal Star
Even if the Peoria Area Water Wizards (PAWW) girls 400-meter freestyle relay team finishes last at the National Junior Olympics next month in Syracuse, N.Y., it might set a record anyway.
The four girls - Kate Durbin. 13. of Peoria Heights: Erica Wisniewski. 12, of Morton; Jenny Bauernfeind, 15,of Pekin and Beth Veerman, 13, of Pekin – may be the youngest group to compete in the meet, which has no age group classification. Swimmers 18 and under are eligible to qualify for the meet, which will be held April 9-13.
The PAWW foursome qualified by swimming a 3:40.34 at the Illinois Senior Championships in Rockford earlier this month, finishing second to the Deerfeld High School state championship team. To put the PAWW girls accomplishment in perspective, their time would have placed them eighth in this year's state high school meet, a remarkable achievement considering all but Bauernfeind, a freshman, are in grade school.
"All season I've talked about Junior Nationals as a point of reference to give the kids something to shoot for in the next year or two," said PAWW coach Mark Rauterkus. "I try to set standards high, but getting there wasn't really a goal, it was more like a dream."
But at least one of the girls thought it was a possible dream.
"I was adding up our best splits before the race," said Bauernfeind, "and I knew we had a chance at getting the qualifying) time."
But it took best efforts by all four to do it. Bauernfeind had the biggest drop, from:56.3 to :53.5. Veerman went from :54.9 to :54.7, Durbin from :56.5 to 55.8 and Wisniewski from :58.5 to  :57.0.
Because of their age difference, it was the first time the four had swum together. "We should do better at nationals because we've been practicing our starts and working together," said Veerman.
But first the three youngest girls are competing in the Illinois Junior Olympics this weekend at Evanston along with 28 other PAWW teammates aged 14 and under.
"That is still our biggest meet of the year," said Rauterkus. "Nationals is just one race. We finished 10th in the state last year and our goal this year is to finish in the top five."

The PAWW team would go on to finish in 2nd place in the Illinois JOs and eventually get 2nd place as a team at the Illinois State Senior Championships too.
The following season, the girls had both the medley relay and free relays in the meet. A year after that, with Coach Mike Smithers at the coach, PAWW had both A and B girl relays at the National Junior Olympic Meet. 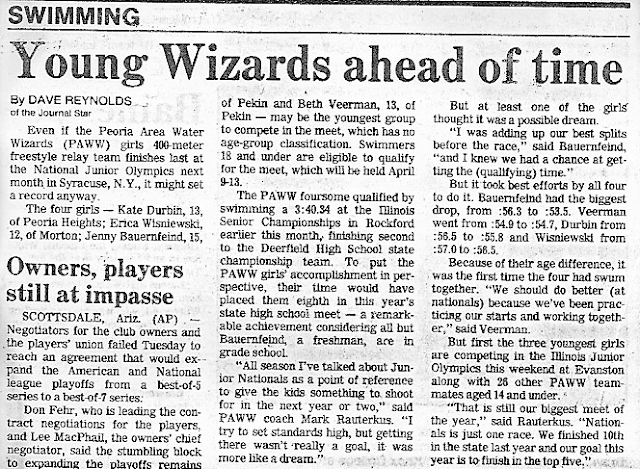 Posted by Mark Rauterkus at 2:09 PM No comments: