Following in my dad's footsteps -- teacher letter from a former student. 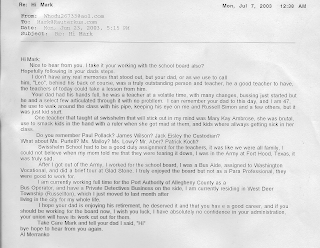 Nice to hear from you. I take it your working with the school board also?

Hopefully following in your dads steps.

I don't have any real memories that stood out, but your dad, or as we use to call him, "Leo", behind his back of course, was a truly outstanding person and teacher, he a good teacher to have, the teachers of today could take a lesson from him.

Your dad had his hands full, he was a teacher at a volatile time, with many changes, busing just started but he and a select few articulated through it with no problem. I can remember your dad to this day, and I am 47, he use to walk around the class with his pipe, keeping his eye on me and Russell Simon and a few others, but it was just kid stuff. .

One teacher that taught at Swisshelm Park that will stick out in my mind was Mary Kay Ambrose, she was brutal, use to smack kids in the hand with a ruler when she got mad at them, and kids where allways getting sick in her class.

Swisshelm School had to be a good duty assignment for the teachers, it was like we were all family, I could not believe when my mom told me that they were tearing it down, I was in the Army at Fort Hood, Texas, it was tnﬂysad. -

After I got out of the Army, I worked for the school board, I was a Bus Aide, assigned to Washington Vocational, and did a brief tour at Glad Stone. I truly enjoyed the board but not as a Para Professional, they were good to work for.

I am currently working full time for the Port Authority of Allegheny County as a Bus Operator, and have a Private Detectives Business on the side, I am currently residing in West Deer Township (Russellton), which I just moved to last month after living in the city for my whole life.

l hope your dad is enjoying his retirement, he deserved it and that you hav e a good career, and if you should be working for the board now, I wish you luck, I have absolutely no conﬁdence in your administration, your union will have its Work out out for them.

Take Care Mark and tell your dad i said, "Hi" bye hope to hear from you again.

Posted by Mark Rauterkus at 5:20 PM No comments:

Email ThisBlogThis!Share to TwitterShare to FacebookShare to Pinterest
Labels: letters

Yes, we have many fine examples of wrong-headed efforts that have blow up in the city's face.

To make an effort as to WHY so many people leave -- well -- would be to call for a brutal self-examination. The people on Grant Street can't even be honest with the passing of a city-budget yet alone introspection. The fluff is going to continue as there isn't much depth.

People vote with their feet. Or, they don't vote. The opportunities for freedom and real self-determination are better elsewhere.

To reverse the trend, develop democratic (small "d") communities again. Put citizens on the same level again among themselves and among the corporations and institutions. When actions are not fair, and when justice is thin -- people see this and depart.

When the Citizen Police Review Board can't meet bacause the Mayor and Council have NOT put enough members onto the body -- something is so wrong that flight becomes the best option.

When council votes to wait and NOT investigate the policies of SWAT -- because the Chief is away -- we have no hope of INTROSPECTION. We can't even look at ourselves in the mirror. We can't assess what we are doing as the power grabbers have trampled common-sense duties.

Sure, the failures of the city schools need serious attention. But, for Grant Street to do that -- no way. The Mayor's Commission on Public Education is a classic example of pond scum thinking. The process was a joke and sorry -- I'd have to say that starting there is not prudent. We'd need to get there, but we need a system that is capable of being engaging and straight.

The dismal quality of the public services are in dire need of a benchmark system. Many here don't know what we are missing and should be able to receive.

The city is not a place working families want to live anymore, until that changes nothing will be resolved. -- YES.

"White flight to suburbs was/is a problem everywhere and wasn't necessarily caused by any bad policies the City of Pgh made."

The City of Pittsburgh is full of bad policies. The rest of the nation didn't shrink in size by 50% in the past decades. Many, many of our woes are our own doing. If you think otherwise, you must not be in Pittsburgh much.

Here is another flash of falsehood:

"However, the politicians have seemingly little to do with the Board of Ed tax and spend policies."

Board of Ed members -- like previous Board of Ed cronies (Barbara Burns and Valerie McDonald) are politicians. Politicians have nearly EVERYTHING to do with the tax and spend policies. The board makes up the policies.

When a discussion goes so far off the radar of truthfulness -- I sense a MOLE.

Posted by Mark Rauterkus at 12:55 PM No comments: 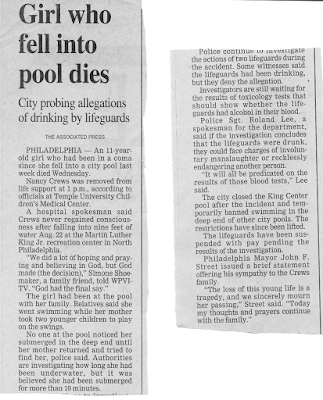 Posted by Mark Rauterkus at 6:12 PM No comments:

Call to action and more 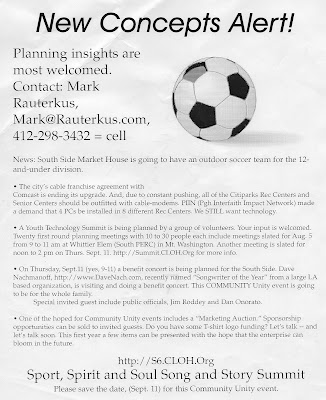