Letter to editor: Headline = The grade is in for John G. Criag Jr.'s column: A big, fat zero

Regarding John G. Craig Jr.'s Jan. 30, 1993 column, "Zero in on Specifics," about a forum he attended on the media, gangs and youth violence:

John, before you read my suggestions, you might want to get a copy of your column and read it aloud. Then try to put your thoughts into an outline.

You ask if we -- "regardless of race, creed or national orgin" -- can agree on someting. Well, I can't easily agree with you because your communication skills are foggy and your lack of logic makes for confusing statements.

Let's not make nice. There is a war in our midst. We are either winning or losing, and I contend that if we make an easy pace today and allow gangs' existence, we are losing.

The "keystones" of your "new policy" to combat the problems of youth violence are useless. "A sense of proportion"? A tiny bit of poison can kill. Informed choices are what's needed. "A sense of responsibility"? To me, it's irresponsible to come down hard on parents, like those of the Carrick girls' basketball team, who were looking out for their children. "A sense of reality"? Refer back to proportion. "A sense of fairness"? Agreed. But why should "getting tough" on crime cost money?

Here is an old idea. You have an institution at your disposal called the Post-Gazette. Why not use it to effectively communicate clearly thought-out, well-written ideas and solutions? Don't use up space in your paper with some gibberish that in reality is only meant to say that the Post-Gazette is fair ad responsible.

John, please get a critical proofreader and a specific sense of logic in your writings. Your column gets a zero in rhetoric by my standards.

Mark Rauterkus
South Side
This old letter, in a swim book file, clipped and yellow, was re-typed and posted to the Running Mates blog on Dec 6, 2005. The original editorial by Craig isn't here.
Posted by Mark Rauterkus at 8:02 AM No comments: 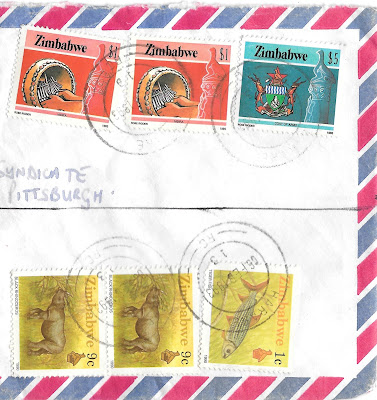 Posted by Mark Rauterkus at 8:16 PM No comments:

OLD NEWS to be inserted into this blog for the sake of HISTORY!
By Michelle Kanche, Tri-State Sports & News Service

A unamimous school board vote has given Plum High School the go-ahead for the school's first water polo team and aquatics game program.

The program will have a trial period, which will run from March 15 - Aug 1. At the end of that time, a full report and evaluation will be presented to the board. The report will describe the program's acceptance in the community and future feasibility.

"The success of this program will depend on the right communication," said Plum superintendent John Cummings. "If it turns out to be a wholesome experience, the committee will look at it favorably for the future."

The program has been coordinated to make it possible for a wide variety of players to participate.

"The creation of the water polo program does not mean that we'll be fielding a varsity team next year," said Mark Rauterkus, Plum's head swim coach and coordinator of the water polo team. "But if this trial period generates enough interest on the high school level, then I hope it will increase the probability of that happening in the future."

Penn-Trafford head swim coach Dave Babbick is interested in seeing Plum get its water polo program started. Last December, the P-T swim team visited Plum for a joint practice and water polo scrimmage to complement their swimming schedules. Plum hopes to coordinate some exhibition matches this year throughout the state.

In order to help raise money for the program, Rauterkus will conduct a Sports Lecture Seris. Modest admission charges to hear lectures will generate money for the student-activitie fund, but will also allow for interaction with respected athletes and coaches with educational messages.

"You can sell candy bars, or you can teach kids important things," said Rauterkus. "Kids today need to see and hear from experts in the field."

For futther information, please call of visit the Plum High School pool on Tuesday (HS & college students) or Thursday (adults) evening from 8:30 - 9:30 pm. The Plum HS is on the Orange Belt.

Swimmers, old and young, fast and slow, male and female, needed for water polo fun. No prior experience preferred!
Posted by Mark Rauterkus at 10:21 AM No comments:

Mark Rauterkus hates to see a swimming pool with no people in it.

Rauterkus, in his second year as Plum High School swimming coach, couldn't believe the school's indoor pool lay dormant nearly all of last summer -- and he's determined to fill it wiht activity once school lets out this year.

In fact, he's going to get an early start.

Beginning March 16 and running through Aug. 1, Rauterkus will direct a water polo program at the Plum pool.

The Plum School board voted unanimously Tuesday to give him the go-ahead and Rauterkus can't wait to get started.

"There is a need to use the facilities herer," he said. "Last summer, we must have had the only pool in America that kept its doors locked all day. I had wanted to run an entire aquatics program here, but (the school board) said to pick one thing. I came up with the water polo idea.

"Hopefeull, it's the first step to a more advanced aquatics program. After it's finished I hope to go back to the board and say, 'Let's talk about some other things.'"

The obvious question is -- why water polo? Even Rauterkus knows it's not the most popular sport in the world.

"The standing joke in water polo is that you don't need your own horse to play," he said. "But I wanted something that might appeal to more than just swimmers on the swim team or just divers. And this is a good recreational outlet for kids in the summer. I thought I could reach a large population with this and have maybe 100 people or so get excited about it."

Once person ready to play is Plum diving coach Fred Luffey, who played on Franklin Regional High School's now defunct traveling water polo team in 1978-79. He hasn't played since, but is looking forward to the opportunity. And he says others are, too.

"There's a free swim over at Plum on weeknights and I've talked to a few guys there about water polo," he said. "Some of them are interested. I think it's a great sport.

"It's a great tool for conditioning -- a lot like baseketball. But it's easy on the knees compared to basketball or jogging. Plus, all you need is 15 people or so."

Rauterkus is countin on many more than that. He will divide the co-ed sessions into three classification: adults, students (high school and college) and kids. Rauterkus has projected 25 people each for the adult and student sessions and 60 for the kids'.

Most sessions will be divided into periods of instruction, clinics and scrimmaging. Robert Webster, formerly the head water polo coach at Harvard University, might be one of a handful of guest coaches Rauterkus plans to utilize.

Rauterkus claims anyone can get the hang of water polo.

The aquatic environment is a fantastic setting to exercise and learn about health, tewamwork and kinetic senses. Since the first priority of the pool, swimming lessons, is generally covered, let's enhance further learning activities. Water polo and aquatic games are fresh, new, dynamic areas that have not been tried locally in the past.

Water Polo is an excellent Olympic Sport, played in the pool with boys, girls, men and women.

New Games Clinics are action packed, moveent oriented and teach both cooperation and competition to engaged, thinking and fitness-striving participants.

the combination of water polo and new games clinics will serve as a valid test area to Mark's overall plan of increased usage and programming based upon challenging, learning opportunities.

Our water polo and underwater hockey teams can succeed early and beecome the best around with modest improvements.

A literacy component can be built into these activities.

We should play polo because we have already purchased the goals and getting a few more balls and hats are quite inexpensive items. (The school owned the goal. The goals were in storage and not ever used since the pool was built.) (The polo hats were purchased by myself, personally. I still have them.)

Mark wants to have fun when he is at the pool too.

These activities can succeed with a larger base of participants and a smaller staff, making the supervision costs easier to recover from the user fees.
Posted by Mark Rauterkus at 11:26 AM No comments:

1. A 35-page Aquatics Expansion (Water Polo) proposal was presented to the board by the Head Coach and voted down (3-4) in December, 1992.

2. In January, the proposal was voted up with the following conditions. The salary paid to Mark Rauterkus, the head coach, is to be equal to the amount of revenue generated by the program minus the expenses paid out by the program.

3. This counter offer by the board was stated verbally by Mr. Neff to Mark Rauterkus.

4. Quick action was favored so that the time-line could be adhered to. However, plenty of new questions and issues need to be formally written before the head coach would consider and accept this plan.

a. Sunday sessions are permissible.

b. Sunday custodial services are not necessary.

c. The Head Coach must authorize all expenditures.

d. In the event that the program’s total revenues do not exceed total authorized expenditures, Mark Rauterkus will not be liable in any manner.

f. The head coach need not be present for every activity.

g. Minor variations to the plan are permissible.

h. This Aquatic Program, since it is a School District sponsored event, will be classified by the school district as a School Function similar to the PTA, School Booster Groups, and the YMCA Latch-key program. This program is not a private interest group, nor is it a community organization like a church, nor is it even a youth group from Plum Borough.

i. The Aquatic Program will request the use of the auditorium and adjoining cafeteria for three events to be held in the trial period, ending August 1, 1993. All the board policies will be followed including security, custodial charges and Air Conditioning payments. The events will include ticket sales and possible appearances of Matt Biondi, an Olympic Water Polo Coach, a Sports Psychologist, a weight lifter, a professional golfer, a scientist and any other author/expert that can be scheduled for a community appearance. Co-Sponsorships packages might be solicited from national organizations that do not already sponsor board activities and no sponsorship will be for alcohol or tobacco products.

Posted by Mark Rauterkus at 8:23 AM No comments: