Handout at a fall picnic

1. The “Community Unity” event of Sept. 11 is being released for TV and WEB. Jim Roddey spoke as well as a minister and great music. If you have interests in any web site, multi-media content or live in a Community with CABLE Access TV -- please speak to me if interested in helping.

2. Ken Heiss hosted a meeting on Sept. 10 concerning the Mayor’s office in the City of Pittsburgh. I’ve got copies of my open letter that was delivered there. As meeting’s notes are made available, I’ll post them.

3. For personal reasons -- please see me if you live and have any connection to school board members or top administrators in: Fox Chapel, or Baldwin, or Mt. Lebanon.

4. A new, bold effort is about to begin with an internet utility called eVote. We’ll do far reaching opinion polls on many matters. I’d love to be certain that all sectors of our community is a part of this endeavor. My email blast list has 6,000 contacts. This can double by the end of the year. Help by attracting REGIONAL email contacts for like-minded people.

5. The Mayor’s Commission on Public Education report that hit this week is being call -- by me -- “POND SCUM.”

Those that agree or think otherwise, we are going to make a public reactions as citizens, taxpayers, voters and parents. Meeting are about to be called to coordinate public reactions. See me if you are interested.

6. FreeTeam.Org has Personal Computers for “gratis loan” to any candidate in the county of any party who desires. Web and internet consulting is included.

7. The Great Replacement RACE is Sunday. A Hash event -- for free -- is to happen after for those beer drinkers with a running problem.

8. A YOUTH Technology Summit is in being planned. This is a long-range plan that will take years to occur. Nearly 10 idea sessions have been hosted and 20 are expected for round one. We need “board members” or better expressed, “faculty members.” If interested in a role for yourself or your company -- please email. We also want to have “idea planning meetings” around the county in various settings with diverse groups.

9. Personally, I’d love to entertain invites to speak to (and with) suburban GOP Committees. I’d love to attend one of your meetings so as to look at issues and concerns shared between the city and suburban political leaders.
Posted by Mark Rauterkus at 12:53 PM No comments:

The Mayor’s Commission on Public Education issued a report this week -- something I’ve called ‘pond scum.’ In my not so humble opinion -- we, the citizens and parents, need to organize quickly and make a measured reply and response to the commission and the media.

The kids and volunteers (as well as others watching this madness now and for the years to come) need to witness and come to know that we are not happy. They need to know that we will work to not only set the record straight -- but work to uphold quality of life issues.

A measured response is necessary in the days ahead -- not weeks or month to come. We need to act quickly.

This media response needs to be much more than a few ‘letters to the editors’ or ‘talk-show rants.’ The put news throughout the Post-Gazette - and on the front page. The media is waiting for our reply and will allow for this story to turn into a healthy debate.

I think the best response from Dr. Thompson, the elected board, principals and staff is “NOTHING.” The scrap that is yet to come can be with the Key Communicators. I want to carry the burden and headaches of a tangle to ourselves so the school people can keep about their business in the care for our children and educational missions.


Perhaps the best way to proceed it to have three planning meetings. If you can attend any one meeting, then you’d be able to have a spot on the agenda for the press event. Then we’d have a reply in the middle of next week with a press event. All meetings could be held at Connelley, perhaps, or else another PERC. Or, perhaps South High School’s cafeteria might be available.

I’d love to get a bit of a boost from the School officials -- in getting the initial call out to the various schools, getting the building permits, and opening up a back-channel email flow of info for those who are willing to contribute ideas.

The PERCs came out of the reorganization from the Title 5 resources. Parents of special needs kids had been having meetings and services from the district for many years.

To work on behalf of all children,

All parents of PPS,

Ken's meeting to find a candidate for mayor in 2005

I sent the following letter to Mt. Washington and Ken Heiss' home! Ken began to gather people together to talk about the mayor's race in 2005. Sad to say, the results of these meetings were fruitless. The meetings didn't generate much excitement, some, but not nearly enough.

My reaction to this endeavor is nothing but “splendid.” Thanks Ken and all the others for launching this discussion. Let’s sustain it on many fronts and in many dimensions.

Tonight I’m at UPMC’s Eye and Ear Institute to introduce a friend from California who is playing at the Grand Opening of the Musician’s Hearing Center. Perhaps I’ll arrive at the end of the meeting to get a copy of the notes from this discussion. On 9-11, tomorrow night, I strongly encourage you to get to Club Cafe by 7:30 pm. The music will be perhaps the best you’ll ever hear. Plus, Jim Roddey is confirmed for 8 pm and Dan at 9 and PCTV 21 will be filming for a rebroadcast.

My thoughts and perspectives the Mayor’s office and candidates are extensive. I’d be happy to sit down with anyone to talk in length and depth about matters. Or, ask via email and the rants and ramblings can be made visible for all to see and ponder.

1. We need an open-source mentality which is a new type of process for leadership and problem solving. We can’t do what Mayor Murphy has done in his closed door meetings and bingo -- 731 are fired off. We can’t be a smoky city where Lawrence and Mellon run the town. When it comes to knowledge, more is always more. We need solution ideas and suggestions to come from citizens of every neighborhood -- from around the world. All the King’s horses and King’s men can’t put Pittsburgh together again -- but all the citizens, with the king’s engagement and leadership can sure try.

Those of us who have been hitting our heads on the wall are going to be in a much different situation after Murphy and the cronies leave. Too many have voted with their feet or just don’t care to waste their time any longer with leaders who can’t and don’t listen. The choice of willing ignorance is going to end -- and we must not field another candidate like what they’ve done.

I don’t want Pittsburgh to be like those in Poland in WWII -- where there was Hitler to the west and Stalin to the east. The citizens will not rush to new leaders unless there is a team that has a process of inclusion and distinction.

Stories, payables and even a book, Compelling Sense, have been crafted to express these fundamental shifts that need to occur in our government’s style and operations. We don’t need to shift the street. No, it is much more. We need to alter our philosophy and then chart new courses and directions.

To win this office from a non-Dem, we’ll need someone who is here to make history and not be a slave of it. We can’t run a person with a program that is like the Ds but better.

2. We need a communicator. Accountants, legal advisors, and bond experts can be obtained. We need a person who writes, speaks, and plays in every setting and every instance. We’ll be talking about modern thoughts with digital friendly attitudes. I’ll go to block parties -- and the high tech council -- and the messages will be understood by the audiences.

3. We need a team player and a team builder. And, the team is with the left, right, and center. We need to go to the faith based community as well as every other community. This web of life in Pittsburgh is still working -- and it needs respect. .

Ken will want a leader who operated a corporation with large budgets. Frankly, I think it is more difficult to coach a swim team with 200 kids and get them to state records and championship levels. Management is hard work and has been ignored. Being direct is not always the most welcomed and flower-filled way. Being brutally honest is a turn off in many situations. But, it is what is called for here. If managers are not doing their jobs -- they need to be written up, benched and / or fired.

This is parenting. We need the mayor to be at our side -- and then on the case of those who stumble in their production. The Ds have lock-step boosterism at work here and reward the ones who follow the predetermined pathway. Rather we need to have managers who grade on another scale that is about service to the customers -- the citizens -- and consider the economics of our time. I’m a tough love manager, parent and coach. Respect will be given to others -- and earned as well in return. The duty of stewardship is hard work and the easy pathways can’t lead us to success any longer.

Of course part of this is coaching, but another part is a regional attitude. We need the next leaders to be in the burbs, in the city, in the state house and in the various sectors of our greater community. Murphy doesn’t play well with others. We need a team that plays well with everyone. And, we need to walk this talk in bold ways.

I do consider myself as a front runner for the job of Mayor. I’m not campaigning now nor do I have a PAC open. But, I’ll have a role -- and it might be that of pace setter. I’m very ready.

Should the election proceed as the calendar goes, given four year terms and no resignation, then I’m thinking I’d love to be in a five way race in the GOP Primary. I’d want viable opponents. I’d want a hard campaign. I’d want the GOPers to do different things than ever before in terms of heavy lifting in the campaign with issues, platforms, debates, and such.

Furthermore, I think I could not only win the GOP primary -- but I’ll try to be the victor in the Dem’s primary as well as a write in candidate. My goal will be to sweep both primary elections.

For Pittsburgh to soar again, we’ll have to fly with both wings -- (left and right) -- plus the tail feathers, body and head. This GOP focus on the Mayor’s race, to me, given the soaring destination, is much like the strong beak that is capable of cracking the nuts of our yet hidden nourishment. Our opportunity is growing. The tide in the city has now shifted.

Thanks for listening --and let’s continue the open, community wide conversation. Reactions welcomed. 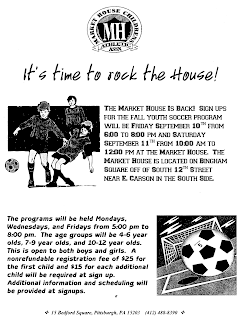 Posted by Mark Rauterkus at 2:49 PM No comments: