Letter to the coaches that I hired, when CM couldn't find anyone to coach. 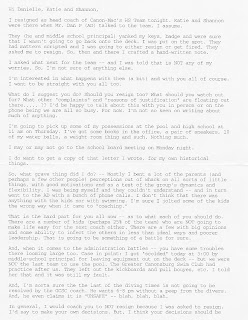 Letter from a student who was new to the sport. Thanks Shannon! 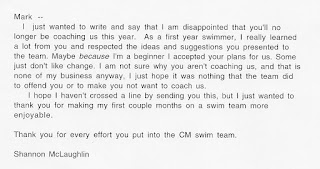 Posted by Mark Rauterkus at 8:29 PM No comments:

This year has been full of family fun and adventure.

Catherine continued to hold two positions at the University of Pittsburgh. One as a faculty member in the Communication Science and Disorders Department -- teaching and running a research laboratory. The other as the Director of Audiology and Hearing Aids at the University Medical Center. A year into this new combination still shows a love of the challenge and the new responsibilities. Being recognized with the Dean's Distinguished Teaching Award was an honor this year.

Mark continued in his commitment to be home for Erik and Grant. They are happy, confident, and self-assured boys because of it. As if this isn't enough, Mark took on several social action projects throughout the year and became a regular on TV while addressing Pittsubrgh's City Council. Although not all of the causes went our way (it looks like they will be taking down Pitt Stadium), it made the whole family proud to know that Daddy was helping with his input into the future of the city. Mark's grumble, "Feudal Pittsburgh."

Mark started to venture back into swim coaching as Grant started pre-school three days per week in the fall. Our schedules don't always quite work, but coaching is clearly Mark's calling and the swimmers are lucky to have him back. Of course, his coaching never really stopped with Erik swimming width-wise across the pool and Grant jumping in and swimming to a waiting parent. Grant can now be heard calling from the side of the pool, "move back, move back" as he propels himself into the water. Mark went to San Diego for a coaching conference, renewing a lot of old friendships.

Erik is a bright, sensitive five-year old attending pre-school three days a week. Erik and Catherine just began Suzuki Violin and are having a wonderful time with it. A block away from our house is the Market House, a wonderful athletic programs for tykes. Erik has enjoyed baseball, soccer, and hockey as well as ice and in-line skating. Grant is a rough and ready two-year old attending the same pre-school and loving it that brother is only a classroom away. Grant has a wonderful sense of humor and keeps us in stitches most of the time. Judging from his sense of adventure and lack of fear, he also may be in stitches! Grant is part thud, part butterflyer. The boys spent many joyful summer hours in Grandma's back yard (across from our house) playing in the wading pool, discovering bugs, writing with chalk and playing with balls.

Last year was a home year -- and this year we traveled. We worked and visited coast-to-coast in 99.

In March, Catherine ventured to Vermont to lead a workshop. That was the first return there since Uncle Sam and Aunt Barbara got married. It went so well that another group asked for a return visit/lecture. So, the whole family went back to Vermont in the fall. It was a three state adventure that allowed a wonderful celebration of Erik's 5th birthday along with visits to Grandpa (Maine), Aunt Pat, Uncle Charlie, and cousin Sandy (Wellsley, MA), a close UMASS friend (P in Southborough, MA), and then finally Burlington, Vermont. Catherine spoke and the family got to catch up with cousin Susan.

Catherine had a great visit with Aunt Debbi in Florida and Aunt Debbi made it to Pittsburgh to see the rest of the family later in the summer. She is a special Aunt, Great Aunt, and Godmother to Grant.

Erik, Grant, and Mommy decided to take Daddy to Chicago for his 40th birthday in May. We traveled with a babysitter and had a wonderful celebration of Mark's birthday and our good friend's 10th wedding anniversary. We were able to catch up with Northwestern friends during the trip. After years of combining work and vacation, the family went to a week long camp: the Southern Unitarian Universalist Summer Institute (SUUSI). What a magical week for everybody - music, fun, spiritual enrichment. Best of all, cousin Cameron from Connecticut agreed to make the trip with us. Now we expect this to be an annual event.

October saw us back at Mark's sisters annual Hootenanny (eastern PA) and we all slept in a tent -- the boys loved it!

Another conference took Catherine to San Francisco in November and Ed, Lori (Erik's godparents) and Margaret and Gerrit Bratt were wonderful hosts during meeting breaks.

There were several nice visits with Uncle Bob who has a standing monthly call with Erik where they discuss the pros and cons of "The Force" and depending on droids. Both are big Star Wars fans!.

The coming year will see a family trip to Arizona for a little work and lots of play with friends who moved out there from Pittsburgh. The family also will wave bye to Catherine for another solo trip, to Chicago were she is in charge of the research portion of the national Audiology conference. In June 2000, Mark and Catherine are going without the boys to Prague and Vienna for a little work and play.

We hope you will let us know if you are coming near or by Pittsburgh - we'd love to see you.

The extended family was made larger by cousin Katie's birth. We are soon to add a baby from the Majewski family and one from the McLaughlin family. Erik and Grant will boast 11 cousins in all and every one of them fun to play with!

We will be bringing in the New Year with Grandma and Cousin Cameron who will come in from Connecticut. Have a happy, healthy, and safe Y2K.
Posted by Mark Rauterkus at 7:38 PM No comments: