New efforts put forth by Alpha Chimp Studios and instigated by Mark
Rauterkus hope to engage thousands from all sectors.

Technology and local YOUTH can energize our shared civic landscapes and economy.


Mark Rauterkus, an activist and former candidate for Mayor, City of Pittsburgh, 2001, is launching a far-reaching community endeavor that needs volunteer participation -- a YOUTH Technology Summit.

Pittsburgh needs a YOUTH Technology Summit so various people can come together under one room. The academics, business leaders, technology firms, teachers, parents and neighborhood players need to celebrate, stimulate and challenge our youth.

Pittsburgh spends too much time, effort and money on trying to recruit high tech workers and firms from other parts of the country. Rather, let's investing in our own. We can grow a brilliant work force that embraces technology here at home. A new priority can be ourselves. As our marketplace becomes vibrant, others will choose to come live over here to mingle with our talented, grounded and healthy neighbors.

Alpha Chimp Studios is run by a husband and wife team, Managing Director, Diane Durand, and Creative Director, Peter Durand. The principals made a pledge to volunteer their collaborative space, talents and host energies for 20 first round planning sessions, 15 second round meetings for strategies and 10 third round implementation meetings.

The work of each session is transformed into art as ideas are discussed. A transcript is typed and posted on the internet. Final documents and a handbook is being prepared for future rounds.

Each brown-bag lunch or breakfast session lasts two hours. Email TechLunch@CLOH.Org to reserve your spot. Up to 15 participants with diverse backgrounds are to attend each session.

Efforts are low cost, easy access and open to anyone. To witness the creative artwork in the collaboration space is worth the investment of time.

Mark Rauterkus, a retired publisher, has worked in the open-source movement. The content and approach put forth is in harmony with Open Source Software -- not propriety. Commercial applications and businesses are going to be involved, but the grand scope is fully open and to be run with democratic votes among any with interest. Technology tools beyond email and web pages, such as eVote, are to be deployed.

The list of those already expressing an interest stretches from Harrisburg to local school teachers and high tech firms in other parts of the country.

SchoolForge, an international open-source software advocacy group hopes that the Pittsburgh event can evolve into a model that can be replicated elsewhere.

Doctors, coaches, fatherhood advocates, and those who operate the state site, InventPA.Com, are set to attend meetings and offer input. Bankers, journalists, home-schooled kids and neighbors are interested and helping to create a buzz.

Mark Rauterkus is a stay-at-home dad who resides with his family on Pittsburgh's South Side. Rauterkus is on the GOP City Committee, the council at the South Side Market House Childrens' Athletic Association, the Pittsburgh Interfaith Impact Network's Youth and Recreation Task Force.

http://www.inventpa.com
Posted by Mark Rauterkus at 1:39 PM No comments:

Concert with the kids at First Church -- Shadyside

Suzuki would be proud.
Posted by Mark Rauterkus at 3:06 PM No comments:

FreeTeam.Org -- was a site in the past

Mark Rauterkus, a citizen activist and former candidate for Mayor, City of
Pittsburgh, 2001, is opening a new service in conjunction with FreeTeam.Org
and some of his other web sites.

Candidates for city council, county council, school board and other elected
offices throughout the region can apply for a no-charge, personal computer
on loan from FreeTeam.Org.

Candidates can apply and pick-up the computers on a loaner basis without realizing any costs. Furthermore, the candidates who seek a computer, as well as any other candidates who don't care to receive the in-kind donation, can get access to a slew of other consulting and online services, all without cost.

Candidates for judge and other positions outside of the legislative and executive branches are not eligible. Election law stipulates limitations on judge races.

The application is simple and requires a personal interview. Associates establish a desire and intent to run a campaign and get onto the ballot. Candidates from any party are eligible. Allegheny County candidates get a preference, but others from the region are eligible pending availability. A meeting is also necessary in the South Side office so as to take delivery of the equipment. Assessing technology skills of those involved in the campaign and customization of needs and services unfolds in the application and interviews. Ongoing support is guaranteed via email.

Candidates who have their own computers are still eligible for the consulting assistance. Pointers and tips are delivered to any who seek this info by appointment.

Twenty nine computers are presently in transit to the South Side and are being made ready for pickup. The computers were donated from a private corporation in the D.C. area and were made available via a board member of Project Gutenberg. Project Gutenberg is the internet's oldest producer of FREE electronic books (eBooks or eTexts).

Project Gutenberg and its cadre of volunteers makes important texts freely available to everyone in the world. A total of 6,267 volumes have been released, mostly into the public domain.

Mark Rauterkus, a retired publisher, has worked in the open-source movement and released various titles into the public domain throughout the past decades. Rauterkus authored Compelling Sense, a work-in-progress, political book with a loose framework that stems from Thomas Paine's Common Sense, 1776. Political books and candidate web sites make splendid opportunities for additional content for Project Gutenberg's efforts.

Dozens of the computers headed to the candidates are loaded with licensed versions of Windows 98 and Microsoft Office. However, as soon as possible, most of the inventory will be converted to free and open source software to give greater performance boosts, reliability and cost/benefits.

A frustration exists as too many candidates don't have web sites and broad access with email. In return, too many elected officials are out of touch with modern communication efforts. Hence, our region's performance suffers as we are less effective and efficient. Citizen and voter frustration is high. People want to see candidates schedules, platforms, news releases, bios, photos, timely reactions to current issues, and even hear audio snips.

Candidates who have their own computers are still eligible for the consulting assistance. Pointers and tips are delivered to any who seek this info by appointment.

FreeTeam.Org is not a corporation. Rather, as a fully-owned hobby endeavor of an individual, donations can be made directly to candidates. Corporations, non-profits and other individuals could make equipment, in-kind or cash donations to FreeTeam.Org and Mark Rauterkus. In turn, supplies can be replenished and additional support extended. Donations would NOT be tax deductible.

Candidates and political action committees that enjoy gifts, services and gratis rentals of computers will reveal the market rate values of the items on candidate financial disclosure forms that are filed with the County's Election Board at specific instances throughout the year. Simple $25 or $50 donations are needed now so as to better outfit the loaner computers with CD-readers and CD-Writers. Interested donors can contact Rauterkus. Supply is limited. As more computers are made available via donations, more computers will be put into the field with willing candidates.

In the past, Rauterkus served as webmaster for the campaign of James Carmine, Ph.D., in the general election in 2001 for the race for Mayor of Pittsburgh.

Many additional services exist on the Internet for candidates and issue campaigns. Part of the consulting efforts is to get candidates aware of some of the better opportunities that exist. Public calendars, groupware, eVote polling, and a wide mix of discussion groups are presented to the candidates and working relationships can be forged.

Poise, sensitivity, polished speaking skills, astute business sense, capable administrator, a commitment to self-improvement, and a sense of humor are the traditional qualities of a person who would make a good candidate for public office. Ask yourself if you are energized by campaigning. At the end of a long day of speech making, strategizing and meeting new people, are you still as ready-to-go as you were the first thing in the morning? Can you build upon the efforts of previous folks and take efforts to the next level?

Good writing skills or else available and trusted proof readers are necessary in today's on-line world. Professional web site hosting makes others take note and more willingly volunteer. Strong reach in getting ideas out to various populations, quickly and in an affordable ways is key to building platform planks and a host of followers willing to make key contributions. All of the online work needs access to a computer, and hours or days can't go past without actions being monitored.
Posted by Mark Rauterkus at 10:58 PM No comments:

Page of a brochure for Elect.Rauterkus - seeking 42nd Senate seat 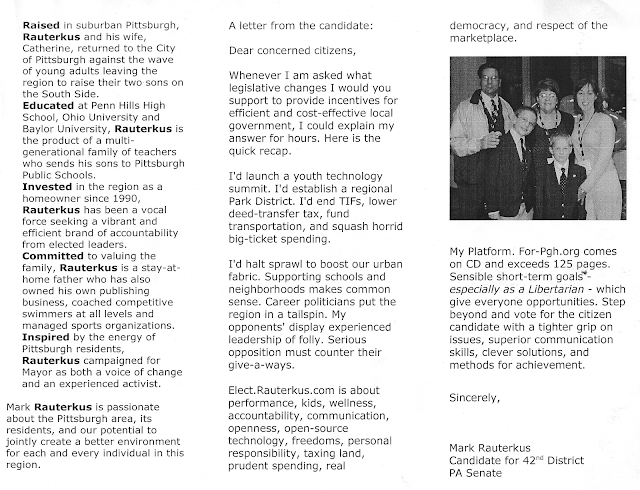 Posted by Mark Rauterkus at 8:25 PM No comments: