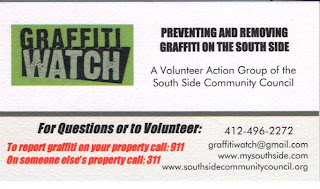 VOLUNTEER for the GRAFFITI WATCH PAINT-OUT
ON SATURDAY 13 October

ANY ONE INTERESTED IN PREVENTING AND REMOVING GRAFFITI ON THE SOUTH SIDE IS welcome. This work is ongoing and we need new volunteers.

GRAFFITI WATCH = WE CARE = WE DO = SOUTH SIDE CARES

WHERE:  We will meet at 2132 Sarah St.  Entrance behind building on Larkins Way

Posted by Mark Rauterkus at 9:11 PM No comments:


Posted by Mark Rauterkus at 8:47 PM No comments:

Posted by Mark Rauterkus at 11:27 AM No comments:

Posted by Mark Rauterkus at 12:41 PM No comments:

Teachers do, a nice story in the P-G.

P-G article with a nice story

But it is built on a falsehood that the school yards empty now that school has begun.

Great story and article. Many in my family have been teachers and I get those questions on a regular basis about my dad, uncle, cousins, grandparents. Fun and rewarding.

One quibble, the start of school does not and should not mean and end to school yard times. School sports and recreation at school facilities after and before the bells ring are IMPORTANT. We as parents and community must coach our kids below their heads. Fitness, metalwork, and the heart are too often discounted in non academic times, and we all are less because of that evil practice.

Now that school has started, get fit, let's use the schoolyards, let's coach play and sporting opportunities.


Posted by Mark Rauterkus at 9:41 AM No comments: