A day at UCDC -- a GREAT experience, as always 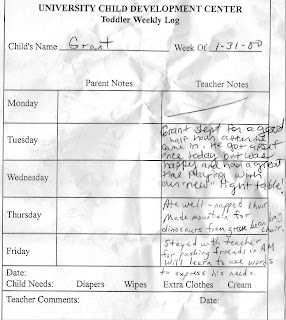 Posted by Mark Rauterkus at 4:27 PM No comments:

Email ThisBlogThis!Share to TwitterShare to FacebookShare to Pinterest
Labels: family

The Pittsburgh planning process is not fair. UPMC and South Side -- go figure

The Process of Planning Is NOT Fair, NOT Democratic and NOT Understood by Most

The South Side Forum, a facist organization, fails in the following test of political fairness.

This opinion is based upon first person observations by someone who has attended all the meetings since November.

Furthermore, the proposed plans for UPMC to build a sports performance compound is not fair, not democratic, nor understood.

We need all voices to have a reasonable influence throughout the extended political process. There are many systems and schemes to choose among to insure that this occurs, and a strict consensus operation isn't among the suitable alternatives.

The planning process should reward and champion the highest and best use, rather than be a series of binary decisions that cause a regression to the mean or lowest-common denominator effect. With a consensus operation at the helm, our future is flat.

A body of official advisers to a president, king, governor, etc. In the U.S. comprised of the heads of the various governmental departments.

Cabinet members should agree with the executives and should work as a sounding board for fine-tuning ideas and policy decisions. Renegade cabinet members might hurt the administration, as there are times for agreement and times for democracy.

A URA official, Jermoe Detore, was at the table with City Council on March 17 at a discussion session that was on the city cable network. He was present for a short discussion as City Council had just given a preliminary vote for the sale of the IBEW site.

The reading of the petitions that was a call from the citizens of Pittsburgh to hold a public hearing on this matter was made. Rightly so, the members of council quickly approved the matter. And, Mr. Detore said, "I'm not sure what this is all about."

He said, "But, we've been working with the South Side community."

"You want to have a public hearing?

"There will be a public hearing before the Planning Commission."

Dan Cohen (city council) said that this was a request of the citizens and City Council did not have any choice.

Meanwhile Jim Ferlo (city council) said that there will be plenty of Public Hearings on this matter.

Ignorance: The Most Dangerous Assumption

The salesmanship is finly tuned, but the wolf is still under the nicly pressed sheep's clothing.

City Council can't shrug its duty to represent the people by bestowing false credtabilty on the flawed process.

The only governmental body to serve as a check to the planning process as instigated by the URA is City Council. This is a grave responsibility that needs to be realized. Do not think that the citizens of an area are in strong support or even of marginal support of what is being done by the URA because the local groups say its okay.

The local planning groups are really cabinet level supporters of the U.R.A. Nothing more.

It seems that the South Side Planning Forum can please only one entity per meeting each month. Citizens, this month is not yours. Next month isn't looking good either.

Needing a Planning Forum and a Steering Committee is like needing a parachute. If the outfit isn't there the first time its called upon, chances are people won't be needing those avenues again.

The South Side Planning Forum should go about its ways and should not be terminated. These good people do good work. Do not be fooled into thinking that this good work is anything close to good work based upon a democratic process.

The LTV Steering Committee might want to change its name, so as to not confuse additional people, to the LTV Back-seat Committee. The steering has ended.

As things progress, the sale of the properties to the respective developers from the URA is going to occur. At that time, there is ample opportunity to make sure that the design forum folks insure that colors of the curtins don't clash. That authority for after-sale conditions is questionable.

The urgency of the sale of properties on the South Side Works looms very large for a number of reasons. Urgent deadlines seem to be self-imposed places in time that are managed by strange forces in nature.

When it comes to hiring employees, the City of Pittsburgh lets its deadlines slip. The Mayor can't seem to hire a Fire Chief, week after week goes by and nothing happens. The hiring delays are unmatched only by the seemingly strong love for deadlines on development projects.

Ya gotta love the deadline mentality, especially the whooshing sound deadlines make as they go flying by.

In early Feb 99, UPMC started to move earth with the graders, on behalf of the URA, without closing the benefit of a signed deal.

Rushing Ahead While Looking Backwards

Community members need to get smart with our presentations about the South Side Sports Performance compound. Let's get smart and tell the world, the School Board, the City Council members, and the County officials as such. The Pitt leadership won't know otherwise. To explain Pitt's disregard to urban planning and its neighbors is epic. We could tell you everthing that has happened in Oakland, but your brain would explode.

There are very few personal problems that cannot be solved through a suitable application of high incentives for community access program facilities.

To champion community access goes way beyond program decisions. Facility requirements and constraints are important issues that need to be fully explored before the foundation gets laid in steel, brick and concrete.

The line-up of community facilities in Pittsburgh has a number of serious shortcommings. Our needs are grave in some areas. The specific areas of need are covered by other sections of this paper and are subect to some additional speculation.

Realize that 90% of all of C.M.U. graduates depart the Pittsburgh area upon graduation. That type of human-resource retention is unacceptable. Needs exist, undoubtably.

So, we're working among ourselves to prioritize and express various needs and concerns. We'll tell Pitt what is needed, and Pitt will tell us how to get along without it. Pitt has done this over and over again when it comes to employee fitness, recreation opportunities and other quality of life issues with structured community play -- things that need facilities.

A new fitness certer was built in the ground floor of the Pitt Nursing School. The clamor to get that facility built lasted for years before the space was found. The need still exists for 10 additional sites, just for students on campus. The need for 10 or more additional sites is also exploding with the faculty, staff and employess.

I don't have an attitude problem. You have a perception problem.

In the fall of 1999, we'll take a walk along the river banks and looking up to the stars in the sky and think to ourselves, "Where in the heck are the stars?!" The flood of lights will wash-out the night sky.

In the fall of 2000, we'll be working out in the weight room, and looking up to push out some of the reps on the bench press and think to ourselves, "Where the heck is the ceiling?!"

UPMC officials boasted by saying, "Pitt turns off its lights at night. We don't run the lights in the parking lots." That comment was to sound sensative and very neighbor-friendly. Well, it might be in other places, like in Cannonsburg. Downtown goes to sleep at night too. The South Side isn't elsewhere. If UPMC comes to the South Side, there is a great chance that we'll want you to keep the lights of the parking lot ON at night. We use our spaces beyond the 9-5 business hours, as we live, play and work here. That is balance. --- My Reality Check bounced. --- On the keyboard of life, as we plan with UPMC, let's always keep one finger on the escape key. --- People in Pittsburgh don't suffer from stress, obesity, back aches, and other wellness issues. We're carriers. Never argue with an idiot. They drag you down to their level then beat you with experience.

Posted by Mark Rauterkus at 5:23 PM No comments:

Email ThisBlogThis!Share to TwitterShare to FacebookShare to Pinterest
Labels: fixture, Pittsburgh Politics, Rauterkus, South Side, UPMC
Dear Friends and Folks with connections to the 'burgh!

Seeking Sports and Fitness Advocates for a newly forming Coalition

Those with brain-power to spare with political, grass-roots, and community access interests are most welcome to join the South Side's Markethouse Athletic Association as we convene a coalition to champion ideas and issues central to sports participation opportunities.

Present: The URA (Pittsburgh, PA's Urban Renewal Authority, http://www.ura.org, and UPMC (Univ. of Pittsburgh Medical Center, http://www.upmc.edu, have begun a 90-day OPEN DISCUSSION period. A $25-30M sports-medicine / sports-performance compound is on the drawing board for a large section of the LTV site on the South Side.

Past: At the Washington's Landing development, the URA invested $3M in tennis courts and park space. Furthermore a .9 acre site is leased at nominal charge to the non-profit Three Rivers Rowing Association, http://www.threeriversrowing.org, for its boathouse, fitness center and offices. Gems like these found in other development projects are uncertain -- quote: community access issues are nebulous at best -- when it comes to the LTV site.

Future: Ideas and voices needs to be organized and shared.

Get further information and a kit geared to getting yourself, community agencies and regional businesses into this extended planning process.

Thanks for listening. This advance notice was posted by Mark Rauterkus, convener's chair, NUKED. The message went to a number of contacts such as yourself via BCC. Your address is part of Mark's personal email address listings. News agencies, thanks for NOT publishing, rather wait for the pending OFFICIAL Press Release. Feel free to forward this message others you know who might be keenly interested. Please do NOT post as spam or broadcast to USENET Newsgroups.
Posted by Mark Rauterkus at 9:09 AM