Public Statement by Mark Rauterkus - No Toll Road to Pittsburgh

Against the Mon Valley Toll Road

My name is Mark Rauterkus. My family and I reside at 108 South 12th Street on the South Side. I have a home on the internet, Rauterkus.Com.

My internet site has a copy of this statement and additional information about my stands on this and other transportation projects. This statement makes mention of only a few points -- other observations are on-line.

The Mon Valley Toll Road has a few different parts. Each part has its own merits and strengths. And, as a organic web of life -- the sum of the parts needs to be considered as well.

What has already been built is fine. The thrust of what I hate is what has NOT been built and what has been shown about in some of the Turnpike Plans. What is already there now is much different situation to what is present among the plans.

The treatment of the city's fabric, the brownfields, the river, and the tax burden are matters of a different color. What is NOT yet built in the plans for the Mon Valley Toll Road is a bad idea.

The Toll Road is NOT prudent and far too costly.

Recently in the West End, Pittsburghers were passing around the hat to collect money to purchase a traffic signal at a dangerous intersection. We have kids getting run over. The city is in such a way that it can't afford to buy a stop light. This toll road is going to run us over too. The steam-rolling agenda has been set in place. The disparity is wide.

The costs for the Toll Road are too great. The pricetag per mile is wreckless with our tax money and bonds. This solution is too expensive.

This solution is full of corporate welfare. I understand that there are 17 engineering companies needed to finish this project -- as there are 17 sections to be built. This is amounting to HIGHWAY Robbery.

The taxes and debt to pay for this road is going to be a burden for my kids's kids. The costs are going to prohibit us from doing other things -- as we are blowing our wads on this.

I call myself a Free Market Republican. That is much unlike the overspending Democrats and much unlike the corporate welfare Republicans. The toll road is a big subsidy. And, the subsidy is NEVER going to pay off for the region.

There are many other more prudent options. The Mon Valley Toll is NOT prudent in the slightest.

Buy out the railroads.

At a public hearing in these chambers it was mentioned that there are 65 miles of rail road track and right of way that could be obtained for a price. None of the leaders are exploring that option in meaningful ways.

Rail service goes to all of the Brownfields. Meanwhile, the Toll Road misses them all.

We can run trains from Century Three Mall --- up and down the Mon Valley and into Town.

In today's landscape, the trains are NOT going to be for bringing workers into town for day jobs. Rather, what is needed is rail service so city-residents can be workers in new jobs created in the brownfield locations. This is an inverse to the trian of thought (pun intended) for existing leaders.

At a recent job fair at Goodwill, EcoStar recruiters were present. They had hoped to hire 1,000 employees as soon as possible. The office space is in McKeesport. A friend I know who has been out of work for the past year wouldn't consider that as a viable option because of the commute to McKeesport. We need to put him, in the city, onto a train, and taken to work in McKeesport. Then he can come back again, live car-free, enjoy the city life and thrive.

The rail road rights of way can be converted (if we must) to light rail. This can connect with the right of way on the East Busway. This can be connected to the Overbrook Line in the South Hills.

Fix and maintain what we have.

The intersection at Bates and the Parkway East is a complete mess. The frontage road in the Second Ave area was done poorly. Fix it. Don't make it more of a mess by terminating a four-lane superhighway there.

The intersection at Streets Run has to be the worst in the world. This is getting repaired now -- on your watch. It is a massive nightmare.

The Glennwood Bridge went out for repairs -- and now the on-ramps. Perhaps they could have been better coordinated.

The McArdle Roadway bridge has been out for years. That leads to the Liberty Bridge, Liberty Tunnel -- and helps the South Side and Mt. Washington. There is no excuse for this outage.

We should not be building any new roads until these are fixed.

Fix the Birmingham Bridge. It was built with two other exit ramps at the South Side. we can't even fix the bike bath sidewalk to drop into the park behind the Libary and swim pool.

We should be building pedestrian bridges, roundabouts, and better managed elements to ease the bottle-neck trouble points.

Jim Ritchie of the TRIBUNE-REVIEW wrote in part:

The cost of building the state-endorsed Mon-Fayette Expressway route through Allegheny County is $788 million cheaper than the only other alternative, according to a long-awaited government document released Friday.

There are plenty of other alternatives that cost much, much less. The article is accurate when there is a total lack of imagination. Of the two alternatives, one is $1.xB. The other is $2.xB. To write as if one is a $788 M cheaper is cheap journalism.

Posted by Mark Rauterkus at 5:36 PM No comments:

Game vs. the Rec Center Staff 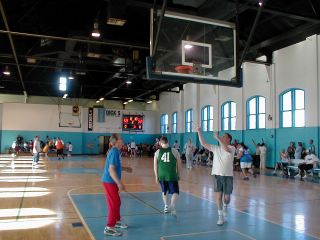 A softball game was played each summer as well.

Now, you can't have such games games as the staff had all be fired.

It always took a village -- staffers and volunteers to make the programs work as they did. Those were the days.
Posted by Mark Rauterkus at 1:11 PM No comments: