Web version.
Posted by Mark Rauterkus at 10:43 AM No comments:

No police on the job in Freeport 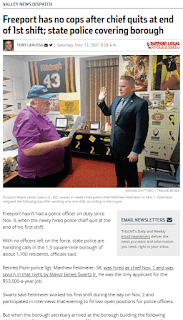 Freeport hasn’t had a police officer on duty since Nov. 3, when the newly hired police chief quit at the end of his first shift. With no officers left on the force, state police are handling calls in the 1.3-square-mile borough of about 1,700 residents, officials said. Retired Plum police Sgt. Matthew Feldmeier, 58, was hired as chief Nov. 1 and was sworn in that night by Mayor James Swartz Jr. He was the only applicant for the $53,500-a-year job. Swartz said Feldmeier worked his first shift during the day on Nov. 2 and participated in interviews that evening to fill two open positions for police officers. But when the borough secretary arrived at the borough building the following morning, she found the chief’s badge, office keys and a handwritten letter of resignation stating that he was leaving “to pursue other interests,” the mayor said. Several telephone and text messages seeking comment from Feldmeier were not returned. The only other police officer on the borough’s roster is Terry Lucas, a part-timer who also works as a police officer at a hospital in Pittsburgh. But the mayor said Lucas hasn’t worked a shift for the borough in nearly five months because of the demands of his other job. Swartz said Feldmeier gave him no indication that he was planning to resign. “He stayed after his first shift was done to sit in on the interviews with the police candidates we were having that night,” the mayor said. “After we were done, he walked out with one of the guys who was interviewed and told him he hopes he sticks around if he gets hired. So, when I heard he resigned the next day, I was pretty surprised.” The mayor said he could think of no issue or dispute between Feldmeier and him or other borough officials that would have prompted the resignation. After being hired, Feldmeier told the Tribune-Review that he was “very excited” about the position and that he looked forward to getting back to work. He said he had not thought about taking over as chief of a department with no patrol officers but that he was looking forward “to meeting the new police officers that will be coming on board.” On the night Feldmeier was sworn in, council approved hiring two police officers, but those positions have not been filled. Feldmeier worked in Plum from 1990 through 2015, including a nearly two-year stint as acting chief. When he retired from Plum as a sergeant, he worked part time at other police departments. Swartz said Freeport hired Feldmeier part time after his retirement from Plum but that he left after less than a month. “He went out for training with the former chief to get familiar with the area but never went out on patrol by himself,” the mayor said. The mayor said Feldheimer asked during his interview for the police chief position whether there were areas in the borough where crime might be a problem. “I told him where the bars were located and that, truthfully, this is a quiet little town,” Swartz said. “So I think he pretty well knew what the job was about.” Swartz said Feldmeier has not responded to his telephone calls. “I tried to call him, and it went to voicemail,” Swartz said. “Later in the day, I texted him, and he responded that he would call me back in 15 minutes. After about six hours passed, I texted him again to say I never received his call, but I didn’t hear anything back from him.” Swartz said he called Feldmeier again the following day but it again went to voicemail. “At that point, I was done calling him,” he said. Feldmeier was hired to replace Eric Belton, who resigned after six years in Freeport to take a job with Plum police. His last day with the borough was Oct. 29. Freeport’s only other full-time officer, patrolman Chris Kovacs, resigned to take a job as an officer in South Buffalo Township. His last day was Oct. 28. Because the department is so small, there already was an arrangement for state police to respond to calls in Freeport when there were no borough officers on duty. Swartz said Belton also alerted state police before he and Kovacs left to inform them that their departure left only Feldmeier on the roster until more officers were hired. The mayor said the arrangement will remain in place until the department hires a new chief and additional patrol officers. The closest state police station is Troop D in East Franklin, usually referred to as the Kittanning barracks, about 16 miles away. Swartz said it will be up to council to decide about filling the two police officer positions or waiting until a new police chief is hired and can participate in the selection process. “I don’t have any say in personnel matters, but I’d like to follow through with filling those positions so we can at least get some cops out on patrol,” he said. Councilwoman Mary Bowlin said she, too, was surprised by Feldmeier’s abrupt departure and had no inkling that it was coming. “It came out of the blue,” she said. “I don’t know what happened.” She, too, said she was unaware of any issue that might have prompted the resignation. She said council will talk about how it plans to move forward to fill the chief’s position when members meet Dec. 6. Because it is a personnel issue, the discussion likely will be conducted in executive session, she said. “We’re being covered by the state police, but we obviously prefer to have our own officers who know the community out there.”
Posted by Mark Rauterkus at 10:41 AM No comments:

Email ThisBlogThis!Share to TwitterShare to FacebookShare to Pinterest
Labels: Police

Posted by Mark Rauterkus at 2:00 PM No comments: