I have a few things to share with you, and I’d like your assistance on a couple of them.

First, my proposal as presented to the school board in July is dead. There was discussion at the last workshop meeting. I guess the board is unwilling to give up complete control.

Second, the board is interested in talking with me about getting better utilization from the pool facility and they suggested I go back to the athletic committee. So there is good news with the bad.

Third, there is no future athletic committee meeting scheduled. I want to have an honest discussion and design a working plan along with the athletic committee with the goals of writing a motion that would be forthcoming from the athletic committee. Then I’d like to take the motion to a vote with the full board some time in 1992. My last plan didn’t even get a vote as there was no motion ever made. Furthermore, I didn’t hear any strong objections to specific parts to my plan, so I’m wondering what needs to be changed. I feel progress can be made if the athletic committee writes the proposal and motion with my assistance, instead of the other way around like last time.

With these regards, could you see to it that a future athletic meeting is scheduled for discussion on these issues. I asked Mr. Becker at the end of the last board meeting and he said there were

no plans for future meetings, but that was understandable as the big issue was the teacher’s contract. Now that that is over with, I hope we can give some further attention to the swimming activities, as we do need to make plans for summer soon.

I feel that the three committee members and myself could hammer out a great package and proposal. If we wanted to get very serious at the athletic committee level, we should schedule a meeting and have the superintendent, athletic director, Mr. Neff and even the legal advisors present, Frank Jones and I’d bring my lawyer too.

Fourth, to change the subject, I’m recruiting an assistant swim coach to Plum from Southern California. I have him very interested in moving here to help me with the team this winter, as we have been talking for weeks. Robert Webster is 36, single, and a strong Christian. The last time he spoke he was interested in local fellowships and churches. This guy has coached at the college level many years and is in-between jobs as he was getting graduate work at Univ. of Pacific when the budget axe fell on his department and he was cut. He has put in for the opening of Head Swim Coach at Southern Illinois University Women’s Team, but I think we could get him here with a little effort. He wants to make a long-term move to a community and someday meet a woman and begin a family. I said Pittsburgh is the perfect place.

I’m going to hire him to assist me in my business as project manager for two short-term jobs as we publish a new water polo book with a former Olympic Water Polo coach who is also in Southern California and as we make a second edition of a swim book with another writer/coach now in Southern California. He would gather some new data this month, move to town at a few weeks, stay with me over the winter and together we would finish these projects and coach the Plum High School Team.

The year before last, Robert was Head Water Polo coach at Harvard. Before that he was working at UNLV. A couple summers ago, I ran into him at the Olympic Training Center in Colorado Springs as he was preparing to take a 10 to 20 swimmers to Europe with the Fellowship of Christian Athletes. Robert is a wonderful gentleman, and dedicated coach.

With Robert’s coaching assistance, and the opportunity to move our full aquatics plan forward, the students at Plum would

have such fantastic experiences. I would love to be able to look to you for some significant help and support with these issues.

Fifth, could we get together to talk again? I’m close to down-town. We could meet most days. Or, how about if you bring the family to the Plum swim pool for an evening splash, $1.50 get the whole gang in. Such a deal! I’m managing the pool now on Tuesdays and Thursdays from 7:00-8:30 pm. We could visit then, and/or afterwards.

I look forward to hearing from you soon.

Posted by Mark Rauterkus at 3:50 PM No comments:

Email ThisBlogThis!Share to TwitterShare to FacebookShare to Pinterest
Labels: fixture 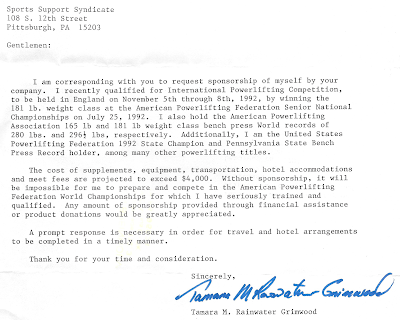 Posted by Mark Rauterkus at 3:53 PM No comments: