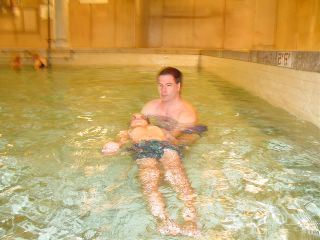 Back float with Erik at the Carnegie Library of Homestead swim pool.Much of swimming is about "body position."

Posted by Mark Rauterkus at 11:24 AM No comments:

Today's ribbon cutting was at 4 pm. I was there with my sons.

Three kids ended up going to the hospital. One broke a bone. One was shot with a B-B gun.

On the opening skate, after hearing about how all the park's users would need to have helmets -- about half of them didn't have on helmets. They were, upon objection, given a 'time out' -- then -- before long, all were back on the boards.

The city is about ten years too late with the opening of a skate park.

I'm suprised that the skate park isn't funded by Dr. Fu -- as he could get a lot of new business from those that play there.
Posted by Mark Rauterkus at 5:22 PM No comments: