Dancing in the park

Catherine loves to dance in the park, and especially loves this group leader. 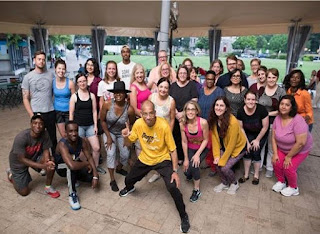 Posted by Mark Rauterkus at 10:47 AM No comments:

Just saw this article...reconfirms and hits your point that all people need to learn how to swim.

Victor Mozqueda no doubt knew that the risks were high, but for him there was no question about what he felt he had to do.

A 5-year-old family member had slipped and fallen into a roaring river in Sequoia National Park in California, and there was no time to waste. So without hesitation Mozqueda plunged into the water to save him, relatives told ABC affiliate KABC.

The 22-year-old's brother-in-law, Ivan Gonzalez, told the station that Mozqueda was "dragged to the stronger currents right away."

"He went under for two to three seconds with the child, he never let him go, and the last thing he did was throw him at my brother for him to pull him out," he told the station. "My brother barely grabbed him and tossed him to his wife, and Victor went under, and they couldn't chase him."

The incident comes just weeks after another man, from Los Angeles, died in the rapids, according to the National Park Service.

"The rivers that travel through the foothills in Sequoia and Kings Canyon National Parks are feed by snow melt and are much faster than expected," officials with the National Park Service said in a statement earlier this month. "Entering into one of these rivers is not only dangerous for the public but also for the rescuers."

Following Mozqueda's death, relatives described how a family trip to the park last weekend turned into an unspeakable tragedy.

Mozqueda's family members wrote on aGoFundMe pagelast week that the 22-year-old man from Santa Clarita was the first person to jump into the water to try to save the 5-year-old boy.

Relatives said that somehow Mozqueda "never let go of him even when they went down under the ⅛current⅜ a few times. The last effort he did was to throw Vincent out of the strong ⅛current⅜ so that his father could grab him.

"We have no idea how he managed to not let go of Vincent to save his own life. He pushed him out right before the current took him."

The child's mother told ABC News that his father, with help from a nearby fisherman, performed CPR on him. He was then transported by air to a nearby hospital for treatment, police told the network.

It was hours before authorities were able to recover Mozqueda's body.

"He is Vincent's Angel and a hero to all of us for ever," relatives wrote on the GoFundMe page, which shows the small child smiling on a playground, still wearing his hospital gown. "We will for ever be grateful for his courage, bravery and unselfish act. We will always miss you Victor and you will for ever live in our hearts."

I have recently finished three books which I believe will hold great interest to anyone truly interested in the state of the U.S. and its relationship with the world.  They are:  The Plot to Attack Iran:  How the CIA and the Deep State Have Conspired to Vilify Iran by Dan Kovalik who teaches Human Rights Law at the Pitt Law School; a truly excellent book filled with recently declassified information concerning U.S. perfidy in dealings with Iran going back as far as World War I and continuing to this day:  Democracy in Chains:  The Deep History of the Radical Right's Plan for America, by Nancy MacLean; a book so relevant to the manifest changes which have been taking place in this nation for the past 65 or so years, moving the U.S. toward what amounts to a fascist neoliberal oligarchy, if not an autocracy, really essential material for all to know:  Gaza:  An Inquest Into Its Martyrdom, by Norman G. Finkelstein; an extremely important review of the long-term and obscene efforts by Israel to effectively obliterate the Palestinian people from any lands they occupy in Palestine and replace them with Israelis, detailing the ongoing stream of lies and deceptions effected by the Israeli government as aided and abetted by the U.S. which acts as a handmaiden to Israel in what can only be considered a march toward genocide.

Fwd: Pioneering: Why Do Grades Hold So Much Power Over Our Children's Futures?

------ Forwarded message ----
Subject: Pioneering: Why Do Grades Hold So Much Power Over Our Children's Futures?
Does the traditional grading system accurately reflect the growth learners experience throughout their learning journeys? More inside.