Posted by Mark Rauterkus at 3:50 PM No comments:

Hockey anyone? How about a chance to win Penguins tickets too.

See http://play.cloh.org/2017/01/31/nhl-nhlpa-gets-into-stem-with-goals-program/
There is a new course, Hockey Goals - Future Scholar. Check it out.
Posted by Mark Rauterkus at 12:10 PM No comments:

Posted by Mark Rauterkus at 7:46 PM No comments:

Email ThisBlogThis!Share to TwitterShare to FacebookShare to Pinterest
Labels: future, Heavy Or Not, honest, Presidential Politics, via John H

Fwd: Did you know today is Data Privacy Day?

Here's something you can do

Posted by Mark Rauterkus at 9:29 AM No comments:

It is now clear with the Trump administration and efforts in other states, particularly New York, that no effort will be spared to insure that any criticism of Israel or support for Palestinian rights will be permitted – up to and including the rights of free speech and association granted by the constitution.  It is true that Fordham University is not a public university and therefore not subject to same Constitutional requirements that would limit government actions, but certainly New York City and New York State are.  It is clear that the State of Israel has a protected status in the United States that no other nation or even U.S. citizens have.  And so it goes . . .


Posted by Mark Rauterkus at 1:56 PM No comments:

This is the time to plan for spring swim lessons. In summer, it is sorta too late. Let's get our kids strong, and strong in the water.

In Pittsburgh, we're blessed as we have the pools. Next, we need to keep up demand and get time in our week to use them.

Posted by Mark Rauterkus at 9:33 PM No comments:

Attached are two, again eclectic, articles.  The first from Scientific American, unfortunately, was not read by a sufficient number of folks prior to the election as it is perhaps the best and most frightening description of our 45th president I have yet encountered (h/t Paula Lim).  If this doesn't make you even more nervous and chilled than you already are, you must have anti-freeze running through your veins.

The second discusses one of America's many recent failures both from the standpoints of the neocons running the State and Defense Departments and from the rational believers in freedom and justice – the U.S.'s funding of terrorist mobsters to overthrow the Assad regime in Syria.  For all of politicians' rants about fighting terrorism in the world, there is no question, in my mind at least, that United States has incubated, funded and supplied 99% of the terrorists in the world, either directly or through proxies such as Saudi Arabia, Turkey and Pakistan.  This will be the lasting memorial of all U.S. administrations from Regan through Obama – and almost all of it done at the behest of Israel in a successful effort to destabilize or destroy all of the independent nationalist nations in the Mideast and Africa.


Posted by Mark Rauterkus at 7:13 PM No comments:

Fwd: Something eclectic this evening

So much is happening and so little time to digest it all.  Attached are three distinctly different articles with no common theme whatsoever.  The first is a typically excellent post by Jim Kavanagh of The Polemicist discussing the situation in Syria as it relates to Russia, the U.S. and our fervent financial support of al Qaeda and al Nusra terrorists in that country – and how it has thus far backfired on us.  The second is an interesting article dealing with political parties as team sports and why, to quote the author, "It is important that we see through the charismatic character, that we analyze the practices rather than embrace the platitudes.  Americans tend to become so fixated on their particular "team" that we cannot root out the negative elements imposed by "our" political players.  This is an important point if we are to make any real progress moving forward.  The third article exposes a critical real-time right now crisis which we will all be facing before we realize it – the crisis of "clean" water availability.


Posted by Mark Rauterkus at 5:28 AM No comments:

Email ThisBlogThis!Share to TwitterShare to FacebookShare to Pinterest
Labels: via John H

1. We now have more Parking Enforcement Officers than pedestrians on East Carson Street.(ask the Pretzel shop).

2. South Side hospital has closed for business.

3. Zone 3 police station has closed for business, and soon to be up for sale.

6. South Side Slopes and Hilltop infrastructure continues to crumble while Bruce eyes removing the Shriners Circus.

7. Residential parking plan that Bruce said cant be amended is now being amended.

8. While the East End and Lawernceville continue to grow and expand, Bruce opposes the 25 million dollar apartment complex on 23rd and Wharton.

9. Bruces staff turnover is more than hamburgers be flipped on East Carson.

10. Bruce shelves 300k hospitality study that he initiated because " he always knows better".

Stay tuned for the sequel because he just cant help himself! Can you believe we are paying Bruce Kraus with hard earned tax dollar money for his lack of council.
Note: We will trade him for any other councilperson or a warm six pack!!

Posted by Mark Rauterkus at 10:52 PM No comments:

Women at a big march are holding signs saying they hoped for the day when they'd have as many rights as a gun? You mean, they wish they could be banned from schools and other public places, closely monitored by the government, and scapegoated for the problems of society?

Posted by Mark Rauterkus at 6:52 PM No comments:

Email ThisBlogThis!Share to TwitterShare to FacebookShare to Pinterest
Labels: freedom, Heavy Or Not, honest

New EdD at Pitt for OUT OF SCHOOL TIME study

Responding to the needs of professionals looking to advance their careers, the
University of Pittsburgh offers a Doctor of Education (EdD) in out-of-school learning.
The part-time EdD is a three-year cohort-based degree program designed around
the needs of working professionals with very clear timelines and an on-line course
delivery model.

The program is intended for experienced professionals who aspire to be
transformational leaders in out-of-school learning. Prospective applicants might
currently work in museums, out-of-school time (OST) settings, libraries, digital
media/technology, university outreach/extension, policy groups and think tanks, life-long
learning programs, parks, environmental centers, arts-based organizations, community
settings, youth development, or the many other areas where we explore learning
environments that exist outside of classrooms. Program faculty are expert in connecting
research and practice and have experience across a wide range of out-of-school
settings, audiences, and learning arrangements.

In addition to on-line work, most students in the EdD program come to Pittsburgh for
occasional Saturday sessions with the entire EdD cohort. Students in the out-of-school
learning program can opt for this on-line/face-to-face model or could choose a
predominately on-line model. Students who do not live in Pennsylvania can apply for
merit-based scholarships to help offset the cost of out-of-state tuition.
We will launch our first cohort in May 2017. Applications are due February 1, 2017.

Posted by Mark Rauterkus at 4:21 PM No comments:


This article is, I believe, an excellent analysis of where the Trump administration is headed.  It's not and should not be a great surprise to most of us, but it presages a dramatically bleak period of world history.  It means that Trump's people in the administration and in Congress will work tirelessly to turn Americans against one another (more than even the neoliberals have managed to do) and then against the rest of the world.  It will be a most challenging period for anyone who believes in freedom, democracy and human rights.  It means that we will have to come together in strong communities in order to survive.  It means that we may well experience a more comprehensive period of totalitarian control of our lives than anyone may have thought possible – a totalitarianism which will make Orwell's 1984 seem positively mild by comparison.

There is no time to waste.  We must begin organizing today developing allies who will stand up to the forces of darkness likely to be unleashed by this administration.  It is not sufficient to know that oppression is happening.  Together we must develop strategies for defending ourselves and others against the coming storm; as well as programs of education for ourselves and others to learn and share from one another what is happening, why it is happening, who or what is behind it and how it can be fought.  As never before, time is of the essence.

Posted by Mark Rauterkus at 3:59 PM No comments:

Video camera of a Saturday event at the Homewood Library featured a new candidate to challenge for the Dem Party Nomination for Mayor, City of Pittsburgh.

Exciting event in terms of audience and messages of the need for a new movement in Pittsburgh.

These are three segments (not complete) from the podium.

Family photo after the speech: 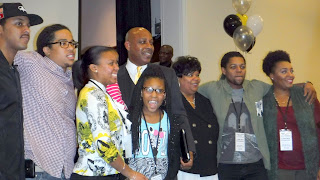 Big welcome for a movement:

Posted by Mark Rauterkus at 8:46 AM No comments:

The first attachment poses an interesting question, how long can Trump last.  This is not the only commentator to suggest this and I believe that it is a fair one.  It is pretty clear that the Republican hierarchy doesn't much like Trump, but they do like Pence a lot.  It is also clear that the intelligence community doesn't like him at all as he is the first president since John Kennedy to threaten to reduce the size of the CIA (Kennedy threatened to eliminate it) – and we know what happened to Kennedy.  On the other side of the picture, it appears to me that Trump may well be a brilliant strategist.  If you haven't noticed he has managed to get virtually the entire media talking about nothing but the size of the crowd at the inauguration and the number of "illegals" who voted for Hillary.  There is almost nothing being said about what it is that Trump is actually doing to us and this may be an accident of hubris and narcissism or it may be fully intentional.

The second attachment dwells on just what kind of a country do we want this to be.  This is an important question and one which I'm not certain enough of us have pondered for some time.  Perhaps now we will all be forced to.

Posted by Mark Rauterkus at 6:29 AM No comments:

Kids and Police in Hazelwood get together to play chess 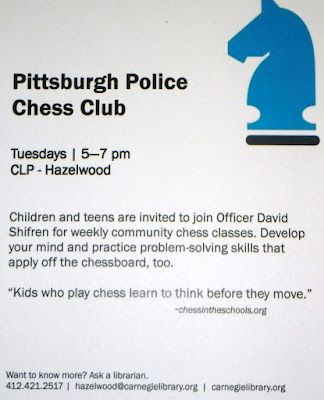 Posted by Mark Rauterkus at 5:33 PM No comments:

Posted by Mark Rauterkus at 7:17 PM No comments:

Fwd: Attend the Summit on Digital Credentials and Badges

Posted by Mark Rauterkus at 4:52 PM No comments: