We'll destory that bridge when we get to it

The statement, "The fix is in", became a buzz statement back in September, 2005, and pressed on people's minds for more than a year. It may or may not go away in 2007.

View of the speakers. 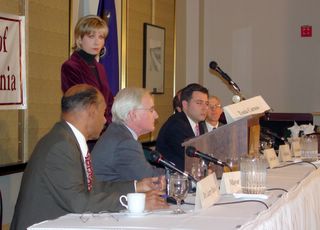 This is the day when Tom Murphy said, "The fix is in." 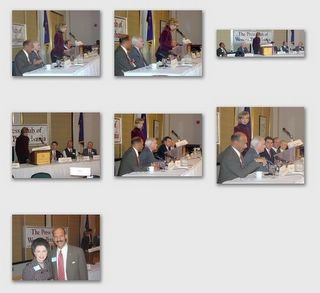 Tom Murphy was able to scold the media for not reporting on how 'the fix is in.' But he wouldn't name names and be transparent as he expected the media to be. Some mayor. Then can Bob O'Connor, then Dennis Regan. Now Luke, the young Jedi, in full campaign mode. But, the casino choice was made and the North Side won -- the dark horse.

What is the deal now with the West End Pedestrian Bridge? 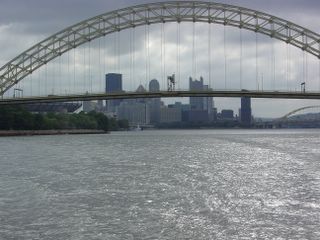 West End Bridge from the water. The Pedestrian Bridge might be built on the downtown side of this span. It would be a smooth connection to the North Shore (shown on the left) and the pending slots parlor.

What is the deal with the North Side's outdoor concenrt venue to be built by the Steelers? Two years ago Gov. Ridge promised $4-million in grants to that deal, sadly.

Yesterday I posted these 'old photos' and then today (Sunday) the Trib put this in the paper, proving that this is a quote that didn't go away easily.

Anyone remember Pittsburgh Mayor Tom Murphy alleging the "fix" was in last year to award the city's sole slots license to Harrah's Entertainment for a Station Square casino?

Thomas "Tad" Decker, head of the state Gaming Control Board, certainly did.

Shortly after awarding a bunch of casino licenses across the state -- including one to a group headed by Detroit's Don Barden, who will operate the Majestic Star on Pittsburgh's North Shore -- Decker became irked when asked by reporters about Murphy's remark.

"How can people accuse us of this not being on a level playing field without having some facts? It irritates the hell out of me because it's not true."

Given the inaccuracy of the former mayor's comment, which he quickly retracted, it's hard to blame Decker for being a bit upset.

The Citizens Voice - Loaded questionsThis is a town where backroom deal-making is part of everyday business, so it shouldn’t be surprising that some people believed — and will continue to believe — that clandestine deals were behind the awarding of the state’s slots licenses.

Posted by Mark Rauterkus at 9:54 PM