Ticket given to woman sitting on park bench -- without a kid

In Pittsburgh, we are about to get finger-printed and ticketed for being in the cultural district without a home or without lunch money.

7Online.com, WABC-TV A woman was given a ticket for sitting on a park bench because she doesn't have children.
The Rivington Playground on Manhattan's East Side has a small sign at the entrance that says adults are prohibited unless they are accompanied by a child.
Forty-seven-year-old Sandra Catena says she didn't see the sign when she sat down to wait for an arts festival to start. Two New York City police officers asked her if she was with a child. When she said no, they gave her a ticket that could bring a one thousand dollar fine and 90 days in jail.
The city parks department says the rule is designed to keep pedophiles out of city parks, but a parks spokesman told the Daily News that the department hoped police would use some common sense when enforcing the rule.
The spokesman told the paper that ticketing a woman in the park in the middle of the day is not the way you want to enforce the rule.

Laws and rules are sure to be enforced in stupid ways. Laws need to be smarter. Often, the smartest law is no law at all. Otherwise, things like this happen.
Parents, don't leave your kid alone in the park. Plus, if there is a problem with a person in the park -- call the police. Police, meanwhile, need to arrive on the park scene and deal with the issues. 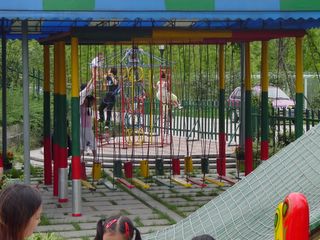 Playground area in a park we visited.
Pittsburgh's City council is trying to fight, "aggressive panhandling." Yeah, right.
Councilman Peduto wants to take the fight to all solicitations.
Meanwhile, County Executive Dan Onorato has a 10-year plan to help the homeless. That might start in a few years.
Posted by Mark Rauterkus at 2:19 PM