Trojan Horse -- Big Pink Pig -- on a trek to the scrap-heap of life, with some help from our friends... 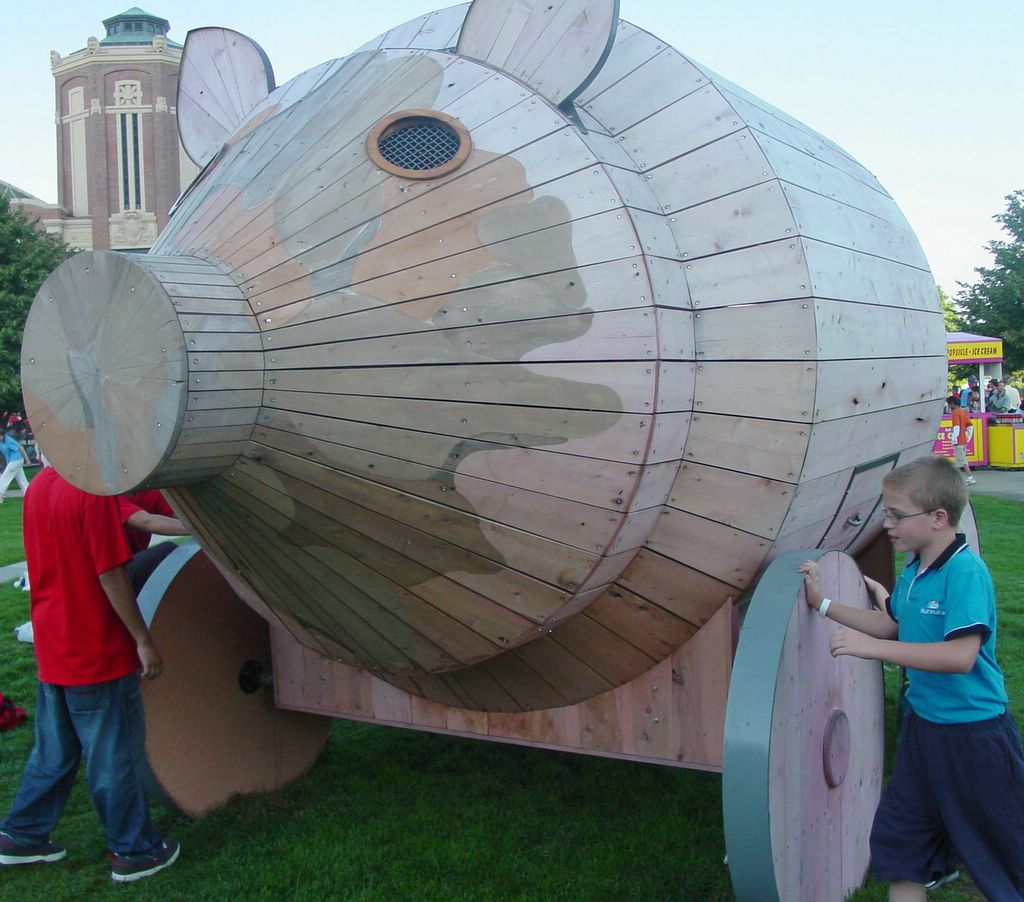 I'm crossing my fingers. Let's hope some of those piggie paygrabbers get dislodged and move to the private sector tonight!
Posted by Mark Rauterkus at 7:11 PM

Photo goes into the public domain. That's my son, Erik, at the wheel. Image came from a park in Chicago.

Valley voters must save pay-raise wrath for November


Voters today may be looking to express their anger over the state
lawmakers' pay raise. There are the ads on TV, columnists and radio
talk show hosts all urging voters to remember.
But few will find a way to express that anti-incumbent sentiment on
ballots in the Valley.

There are no Democratic opponents to Gov. Ed Rendell, who signed the
pay raise last July, before the Legislature rescinded it in
September. There are some challengers to Lt. Gov. Catherine Baker
Knoll on the Democratic ballot and a race for the Democratic
nomination for U.S. Senate.

But no real races against incumbent legislators.

As Ray Anthony, of Fawn, who serves as a local coordinator with
PACleanSweep said, there is little to do.

"We're going to hold on until the fall," Anthony said.

Anthony had expected a primary challenge to state Rep. Frank
Dermody, D-Oakmont, who represents most Allegheny County communities
in the Valley.

Dermody and Rep. Joe Markosek, D-Plum, were the only two lawmakers
in the Valley's area to vote for the raise.

Anthony was involved in Jeff Hammer's efforts to get on the
Democratic ballot in February against Dermody. But a Commonwealth
Court judge in March threw Hammer, of Indiana Township, off the
ballot, ruling he didn't have 300 valid petition signatures.

"People were ready to help Hammer, but unfortunately we cut corners
and it came back to bite us," Anthony said of the petition drive.

Anthony said he has 30 to 40 supporters, mostly in the Harrison,
West Deer, Springdale and Cheswick areas, who will actively help
Republican Eileen Watt challenge Dermody in the fall.

Primary challengers to state Reps. John Pallone, D-New Kensington,
and Joe Petrarca, D-Oklahoma, also were thrown off the ballot after
successful challenges to their petitions.

There is a race on the Republican ballot for the 54th district.
Jason Fularz, of New Kensington, a school board director, and Scott
Witon, a college professor from Murrysville, are vying to oppose
Pallone in the fall.

In Allegheny County, election director Mark Wolosik is predicting a
35 percent turnout for Democrats and 25 percent for Republicans,
which is about average for the last five primaries when the governor
is on the ballot.

Paula Pedicone, Westmoreland County election director, said turnout
is usually not more than 20 percent in primaries, but that might
jump due to the new voting machines.

Heated primary races for legislators can be found in Monessen,
Jeannette and the Mon Valley. Political analysts will be watching
those races, and key challenges to legislative leaders across the
state, to gauge the mood of the voters.

But Valley voters will have to hold any pent-up anger on the pay
raise until November.